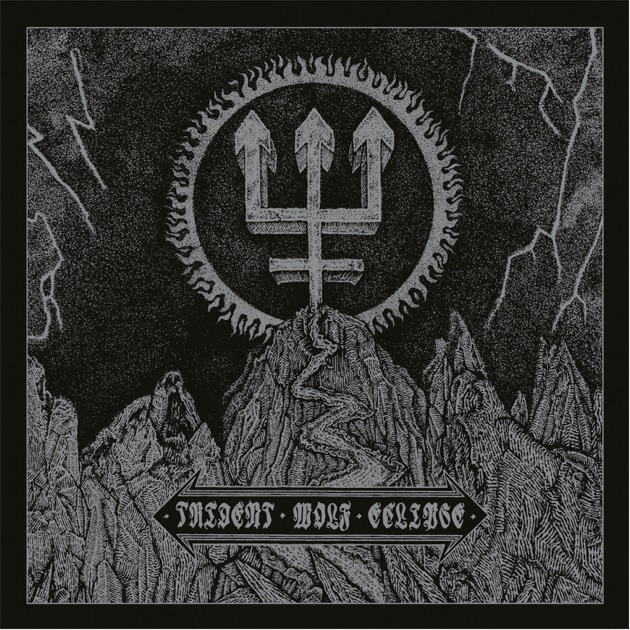 For those familiar with Watain's catalog, the headline is that Trident Wolf Eclipse is way more akin to what Watain was doing in the early 2000s than what they were doing three years ago. I don't know that I'd call it a "return to form", since that would imply that their recent albums weren't great (they were.) Nor would I call it a regression, since that would imply that it is somehow inferior to the band's earlier work (it isn't).

Let's get this much out of the way: from a modern metal production point of view this album sounds fucking awful. It was clearly recorded on an 8-track in some dude's basement, just as Satan intended. Does that amp have a gain knob? Turn it all the way up. How about a reverb knob? Crank it--best not to skimp on the atmosphere! Let's set up the mics in the corner of a cinder block room so we get that really good cave echo. Caves are black metal as fuck.

At least, that's what this thing is intended to sound like. In reality Watain went into the most modern, sophisticated studio that Century Media could afford and told the audio engineers "make us sound poor and unsuccessful, please." Is that a silly thing to do? Yeah, it is. But the result closely mimics the rough semiprofessional recordings we all love from the classic black metal acts. So, hey, money well spent I guess.

Despite, or maybe even because of, the shitty production, Trident Wolf Eclipse is a successful invocation of the black metal ethos. You can't help but compare it to the greatest recordings of the genre in both style and substance. That by itself is an accomplishment, even for a band that's been doing this for twenty years.

The album goes hard from start to finish with an intensity just short of war metal. Even the slower bits have enough tension that they feel like they're propelling the tracks forward. For the most part the riffs are fresh and powerful. Even when they remind you of something you've already heard on a dozen other black metal albums the effect is a pleasant nostalgia rather than a yawn. The vocal performance is typical for the genre. It's not the most memorable performance, but he's definitely not phoning it in either. The drums are typically great, though they sometimes fall into the annoying rut of playing only (a) blast beats and (b) sparser patterns designed to set up the next blast beat. But when the drummer and guitarist sync up for a particularly demonstrative riff (as in 1:27 into Furor Diabolicus) you forget all the historical context and wonky baggage that hangs on black metal and just bang your head and grin like an idiot. There are 4 or 5 parts of the album that transcend the genre like this and it's worth the journey to lose yourself when they come along.

On the whole the album sounds great with the caveats that were always going to have to be made. Bands make a necessary trade-off when they intentionally aim for a classic vibe. It sounds great because it sounds familiar. Yet even though it sounds great, it doesn't completely satisfy because it's not original. The catch is that if it sounded more original, it wouldn't have that classic vibe. Watain accepted this bargain and the result is a chance for us to relive the glory days of satanic black metal. We can begrudge them the lack of originality.

The one thing I refuse to accept about this album is its final track Antikrists Mirakel. This track is pure garbage. It's a completely unintelligible satanic rite yelled through a megaphone over 7 minutes of weak riffs. Why it made the cut is a mystery to me. Slice it off and you've got a much better product.