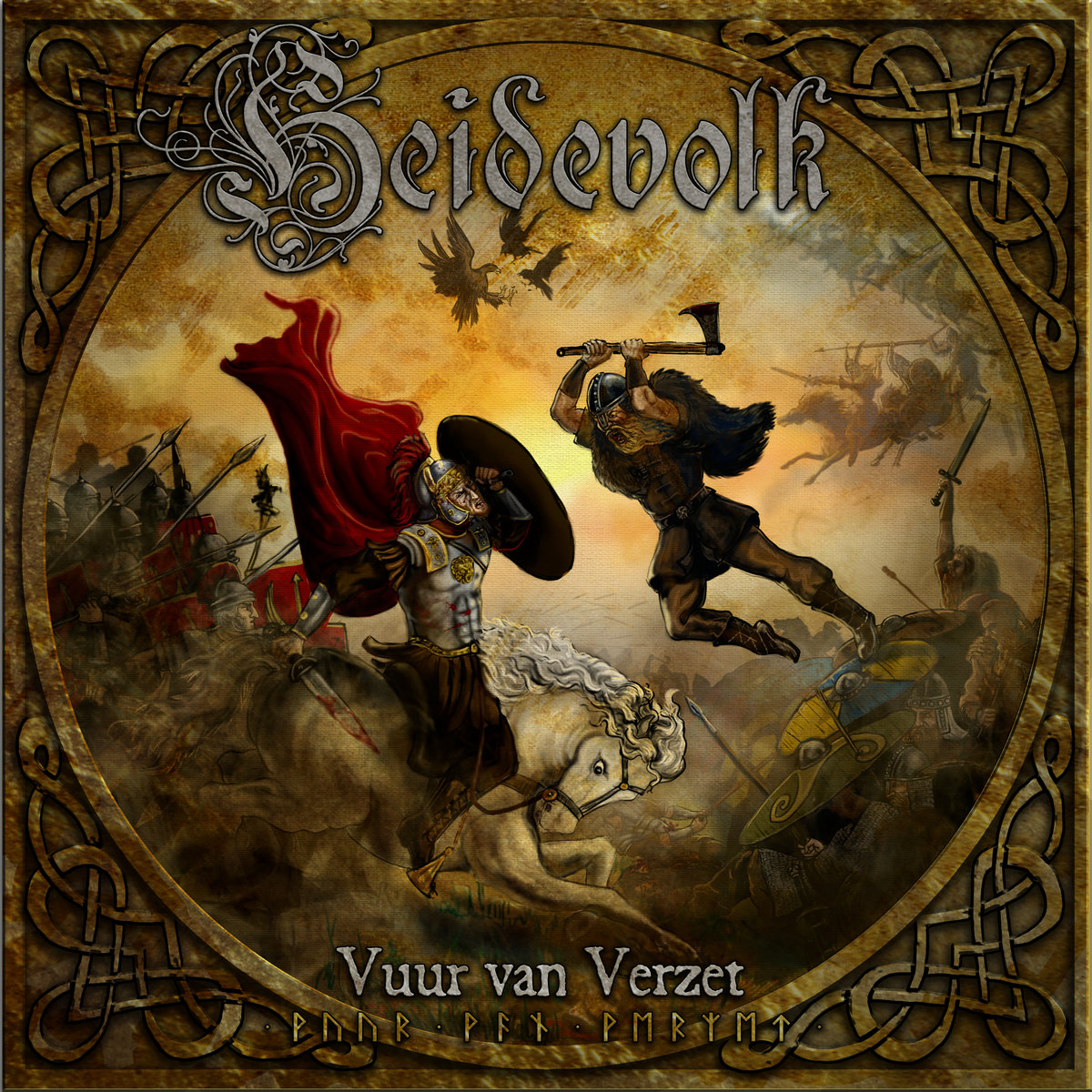 I'm a huge fan of Heidevolk's vocal melodies. If you haven't listened to them before, their shtick is that they have two frontmen, a baritone and a tenor. And they sing at the same time (like, all the time). Both of these guys are great singers, and their voices complement one another well. Until now my main gripe with Heidevolk has been that the band had very little range or songwriting chops. The guitars and drums were like generic karaoke backing tracks. A less serious gripe was that the vocalists are so focused on harmonizing with one another that sometimes they forget to give life to their own individual performances. Sometimes they sound, well, bored.

There's still plenty of generic riffing on Vuur Van Verzet, and some of the songs have uninspired structures. But many of these songs veer off Heidevolk's usual path and surprise the hell out of me. The folk instrumentation is folded in seamlessly where on previous albums it would have been used as decoration between main tracks. This really opens up tracks like Onverzetbaar and Tiwaz, giving them a delightful musicality they wouldn't have had otherwise. The arrangements feel orchestral and alive. When the folk instrumentation comes together with the guitars and the gang vocals (in the epic track Gungnir, for example) we're treated to the kind of authentic tension and release that power metal bands can only try (and fail) to imitate. Fair Warning: You will likely feel feelings.

In fairness to the guitarists, the performances on this album are a huge step forward. The solos don't feel obligatory and forced like in previous albums. I actually want to hear these solos. The guitar tone is also improved, and in line with what you would expect from modern metal production. The drums aren't overly flashy, showing welcome restraint that leaves room in the mix for the rest of the band. The star of the show, of course, is the vocal performances. For the most part they're sticking to what has worked on previous albums. But they're also experimenting with huge choral arrangements, thrash-inspired gang vocals, death growls (!), and power metal tenor wails. And IT SOUNDS AMAZING. My favorite tracks might be the not-metal (but oh so metal) folk songs Yngwaz' Zonen and Drink op de Nacht. Both rival the best we're heard from the likes of Ensiferum and Korpiklaani. Hell, I'd say these tracks are about as good as Warduna's stuff, which, I know, borders on sacrilege. But it's the truth.

Vuur Van Verzet is out now on Napalm Records. I'd link the bandcamp below, but for some reason they're only letting you hear the two least interesting songs on there. Get with the program, Napalm! Keeping the tracks a mystery does not make people want to spend their money on the album! They did post one of the better tracks on YouTube, so here, wet your whistle: