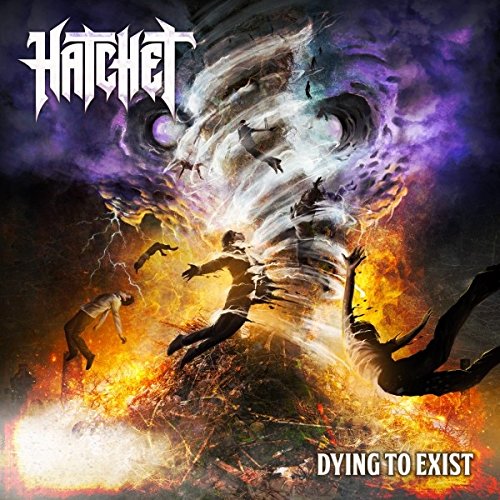 This is apparently Hatchet's fourth full-length album. I say "apparently" because I had never heard of them until today. That's kind of a surprise since I listen to a lot of thrash. Making it onto my radar doesn't exactly make Dying to Exist a breakout album, since I'm always on the hunt for overlooked material. But given how good much of this album sounds, I think Hatchet are well-positioned for success in 2018, over a decade into their career.

The headline here is that Dying to Exist features some absolutely sick guitar work. The riffs are more satisfying than what we've heard on recent high profile thrash releases. I'd put them in a class above Warbringer and Power Trip, and maybe even slightly above Havok. The solos are far and away better than any contemporary thrashers other than Exmortus, which is I suppose why Exmortus would pick them up as an opening act for their current tour (look out Conan, they might steal the show!) If you listen to thrash primarily to hear standout guitar performances you'll find plenty to keep you interested here.

My main complaint is that the vocals are kind of annoying. If this guy would stop doing this bad Steve Souza/David Sanchez impersonation he'd be doing the band a huge favor. But hey, that's just one guy's opinion. They're not so annoying that I can't enjoy those sweet, sweet riffs. And I probably wouldn't be as bothered by them in a live setting.

Dying to Exist came out last week, June 22, 2018 on Combat Records. I'd say it's worth at least a few listens.