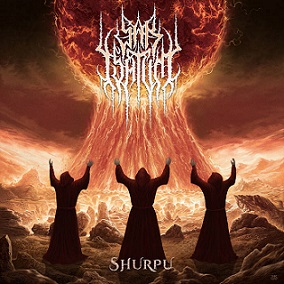 Shurpu is a grandiose, symphonic black metal album in the style of Dimmu Borgir’s Puritanical Euphoric Misanthropia. Which is to say it’s a resurrection of a style most people were happy to see die.

I’m going to keep it real for you. I did not enjoy this album on any of my multiple listens even though I really wanted to like it (just look at that gorgeous cover art!) The drums are distractingly artificial-sounding even though I’m pretty sure they were tracked live by an extremely talented drummer. Were the drum tracks chopped up badly by an overzealous post-production tech? Or do those jagged stutter stops in the cymbal decay reveal an unfortunate reliance on triggers? Both? There are other flaws that don’t directly stab you in the ear. The keyboards and guitars are muddled together through most of the songs. Sometimes it’s difficult to tell what either is doing. And even when you can tell what’s going on the riffs are often repetitive and uninspired. The biggest misstep here is that there is no silence. The symphonic parts could have added a lot of intrigue, but they are drowned in noisy reverb. In the end we’re left with a loud, cluttered mess that never really does anything interesting.

Sorry for the realness. I wouldn’t write this band off completely, as they clearly have a lot of talent. It’s just not showcased especially well on this album, which is flawed both in conception and execution.

Shurpu was released independently by Sar Isatum on November 17th, 2017. I’ve embedded it below so you can make up your own mind. And this is an unsigned band, so if you like what they’re doing, pay the folks!